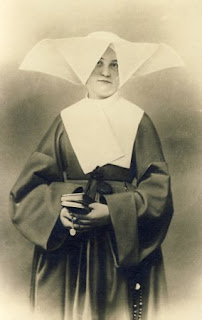 The Vincentian Family has been blessed with three great “giants of sainthood” – Vincent de Paul, Louise de Marillac, and Elizabeth Ann Seton. These “rock stars” of living the Vincentian dream of prayer, community, and service are recognized around the world for their energy, passion, and selfless giving. In addition, however, there are many lesser known individuals who lived out the Vincentian spirit in their own time and the Church honors their path of holiness. Such a woman is Blessed Marta Ann Wiecka. Let’s get to know her.

Marta was born on January 12, 1874 to a wealthy farming family in rural Poland. At the age of two, Marta became very ill. Her family prayed fervently to the Blessed Virgin Mary and she miraculously recovered. We don’t know exactly how this event affected her, but clearly she must have sensed that God had something special in mind for her life.

After receiving her First Communion in 1866, young Marta’s devotion to the Eucharist continued to deepen. She frequently walked the more than seven miles to daily mass in the parish church in Skarszewy. She took a leap of faith at the age of 16 and applied to enter the Daughters of Charity; however, they told her she was too young. Two years later, Marta was accepted into the community in Krakow on April 26, 1892.

Sister Marta was sent to serve God’s people as a nurse and was quickly recognized as a person who worked diligently and gave herself untiringly to her patients. One of the hallmarks of her service was her ability to combine both physical and spiritual care for the people entrusted to her. She encouraged the dying to access the Sacrament of Reconciliation.

This reminds me of the way St. Vincent de Paul frequently spoke to the Daughters of Charity of the call to bring both spiritual and physical comfort to the people we encounter every day. It is not enough to feed people’s bodies; we must also offer them a way to nourish their relationship with God.

Sister Marta’s life was not an easy one, but she accepted difficulties with a heart filled with courage and perseverance. At the age of 30, she contracted typhoid after disinfecting the room of a patient in the place of a young coworker who appeared fearful of this task. She died on May 30, 1904 in Sniatyn. Her gravesite quickly became a place of prayerful gathering of local, ordinary people who knew her to be an example of holiness for them.

What can we learn from Sister Marta? What aspects of her life do you connect with? Are you a person who is willing to offer both spiritual and physical comfort to those in need?

Sister Marta, pray for us!