Home » Blog » Uncategorized » The Apostle in the Top Hat 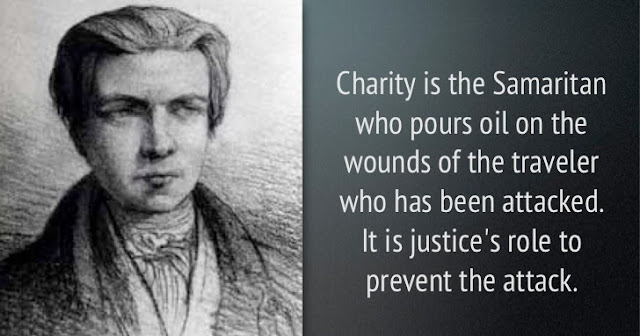 The words in the image above are the spirit of the Frenchman, Frederick Ozanam. Born in 1813, he was a bright student and a devout Catholic who traveled to Paris to study at the famous Sorbonne. It was there that he came a literary scholar, lawyer, journalist, and equal rights advocate.

Born in Milan, Italy, Frederick lived most of his life in France, specifically in the Moufftard neighborhood of Paris. If you’ve ever seen the play Les Miserables, you may recognize this neighborhood as a very poor and unstable area where the Insurrection took place in the 19th century.
Frederick and several of his student friends lived in the neighborhood and saw the plight of the people, especially the poor. It was in this neighborhood that he, along with Emmanuel Bailly, Augista Le Taillander, Jules Deveaux, Francois Lallier, Paul Lamache, and Felix Clave began the Conference of Charity, known internationally as The Society of St. Vincent de Paul.
These men, all academics, spent a good deal of time sitting around pondering what could be done to help the poor. Finally, with the help of Rosalie Rendu, a Daughter of Charity, they were encouraged to stop talking and start acting on behalf on those most in need. So, on April 23, 1833 – Frederick’s 20th birthday – he said to his friends, “Lets go to the poor.” This was the beginning of a movement that is now in 150 countries throughout the world with over 800,000 members.
Frederick built the Society of St. Vincent de Paul with the same three pillars that continue today – spirituality, friendship, and service. These elements represented what was important in Frederick’s life as he developed his own formation as a Vincentian. They are also gifts to Vincentians of the 21st century. As Frederick once said: “The saints were out of their minds when it came to love. Their love was limitless, embracing God, humanity, nature… And so, my dear friends, are we not going to do anything to become like those saints whom we love?”
This is the challenge that Frederick Ozanam willed to all of us people of faith and people of justice. Embracing the Vincentian way, we are called to be “out of our minds” in love for those who are abused and forgotten, ignored and denied basic human rights that are given to each of us as children of God. Frederick knew all too well how to embrace the common good and advocate for a just and humane society. As we celebrate his feast day, are we not obliged to do the same?
Written by Sister Catherine Kelly, D.C.