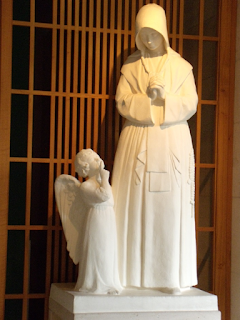 Today is the anniversary of the day Saint Catherine Laboure had her first vision of Mary which led to the making of the Miraculous Medal. The blog on June 8 gives important details of the medal that Mary told Sister Catherine to have made. This is one of the favorite medals used in the Catholic Church.

Saint Catherine was a seminary sister in 1830 in Paris, France when he first vision of Mary occurred. There is an amazing parallel between he feelings regarding her visions and that of a person discerning her vocation in this day and age. Some of them, as I see and as I once experiences, are as follows:
1) Doubt. Catherine doubted if she actually saw Mary and a person can doubt if they are really being called by God to consecrated life.
2) Wonderment. Catherine probably wondered why God would choose an unimportant person as herself to see Mary. Similarly, a person can wonder how God can call someone like herself to consecrated life. God loves us deeply as individuals rather than as part of a human group so this isn’t surprising. He calls many different personalities.
3) Patience. It may have been difficult for Catherine to learn from Mary what her mission in life would be. Mary revealed it later. Just as it was with Catherine, it may be difficult for a discerner at first to realize her mission in life. Waiting patiently and trusting in God’s love is so important in the process.
4) Obstacles. Catherine had to overcome obstacles in her mission of having the Miraculous Medal made and distributed because, at first, the clergy didn’t believe her story. A person discerning a vocation might force various obstacles to overcome in her discernment. This is all a part of the journey. Prayer and spiritual direction can make all the difference. 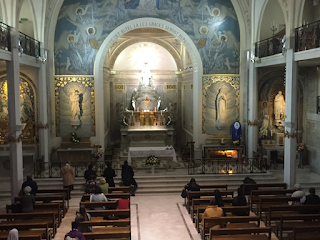 5) Peace. Catherine found peace when she finally did what God had asked for her through Mary. A person discerning a vocation to the consecrated life will receive much peace after a decision is reached with the help of God and the inspiration of the community of saints.
Saint Catherine Laboure is an amazing saint of the Church. We can learn a lot by reading her story. The inspirations we receive will be very valuable.
Saint Catherine, pray for us.
Written by Sister Carmeli Proano, D.C.