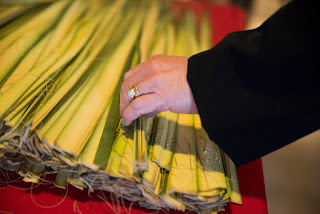 “Behold, your king is coming to you humble and seated on a donkey!” Zechariah 9:9 pops into my head every Palm Sunday. Then comes his Canticle quoted in Luke 1: 68-79, a part of every Daughter of Charity’s daily morning prayer: “You, my child, will be called prophet of the Most High, for you will go before the Lord to prepare the way….” It’s Zechariah talking to baby John, his newborn, right? Surely not about me or every child. Think of the yet unborn Jesus, riding in Mary’s womb, fleeing, terrified, from Herod’s wrath on the donkey ride to Egypt.

Palm Sunday, Holy Week, and the Passion readings trigger so many thoughts. So familiar…so monotonous, so holy and profound! Two pews ahead of me, a brother and sister tickle each other with their palm branches. Doubtless Jesus’ Palm Sunday parade included many children waving their branches while kicking up dust between the cloaks their parents threw down in Jesus’ path. How many generations have gone ahead of Jesus, have prepared a path for me and for you? “Suffer the little children…” (Matt 19:14) and how they suffer!

April is National Child Abuse Prevention Month, first proclaimed by President Ronald Reagan in 1983. Where was I in 1983? I was teaching my first grade class about “stranger danger” when Anni, eyes wide, blurts out, “They’ll hurt your kitty if you tell!” Around the same time, the third grade class is doing timelines. Anni’s brother’s nine birthday pictures hang in the hall, each featuring a black eye. Their grandma said he played too hard and fell a lot. I’m a mandated reporter.

In 1989, Bonnie Finney, a Virginia grandmother, tied a blue ribbon to the antenna of her van in memory of her grandson who died at the hands of her daughter’s boyfriend. Twenty years later, the 2019 Blue Ribbon Project to Prevent Child Abuse is a collaboration of survivors and professionals from various fields who are all tied together due to child abuse and it’s long term effects.

Then, about 20 years ago, the Adverse Childhood Experiences Study (ACEs) was conducted. This study documented the overwhelmingly significant connection between child abuse and major health issues in adult life as well as the connection between abuse and its early, unremitting stress and brain development.

In 2016, United States Senator Heidi Heitkamp addressed a Science of Trauma briefing on Capitol Hill, urging attendees to keep preaching ACEs Too High to “change national policy to incorporate what the ACEs scientists tell us about trauma and to see and respond to the needs of those you encounter in everyday life.”

At Mass, we’re already on the Passion story of Jesus. I’ve let my mind wander, but maybe not far. We all have ACEs. We are “the child” going before the Lord to prepare His way. This year, consider tying your palm branches with a blue ribbon.