The Feast of Saints Peter and Paul gives us the opportunity to look at two very different people. Both were called to follow Jesus, but both responded to the call differently.

We begin with Paul, my patron saint. Paul was called on the Road to Damascus where he was on his way to find men and women who were led astray from Judaism to follow a man called Jesus. His purpose was to bring them to Jerusalem for justice. Paul’s call was so dramatic that even the expression “Damascus experience” has come to express a real conversion. 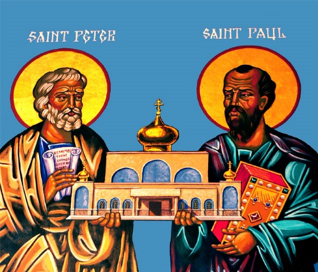 The story of his conversion and vocation is told three times in the Acts of the Apostles (Chapters 9, 22, and 26). Details vary in these accounts, but the call remains the same. Paul also recounts his Damascus experience in his letter to the Galatians, where he finds himself defending his vocation against those who thought his message was of human origin. All of these accounts are interesting and certainly full of detail, but I prefer his account in Philippians 3:1-16.
Paul relates his call to follow Jesus in a rather personal way, one full of desire to be like Jesus. His family followed all of the rituals. He went to a private school. He says he sat at the feet of the great rabbi Gamaliel and was educated strictly in the law of Israel. He gives personal testimony of his background and asserts that he was very zealous and observant. It was these qualities that sent Paul in quest of those men and women who had abandoned the way of their ancestors to follow the way of Jesus. They were apostates and he hunted them down “even to the point of death.”
It was while he was on the way to Damascus that Jesus called him by name. “Saul, Saul, why are you persecuting me?” When Paul asked “who are you?” Jesus said, “I am Jesus whom you are persecuting. But now, get up and go into the city and you will be told what to do.”
Here, we have the immediate call to conversion and vocation. “Get up and go…” Paul never looked back. He spent the rest of his life living out his vocation. Paul later recounts that he left everything to follow Jesus. He knows he hasn’t reached perfection to has become totally like Jesus, but he presses on because Jesus has “made me his own.”
What in Paul’s vocation story resonates with you?
Peter was one of the first four disciples called to follow Jesus. The story in Mark recounts that “immediately, they left their nets and followed him.” Peter was one of the chosen three to be with Jesus on many spectacular occasions. The first was the healing of Peter’s mother-in-law. Later, he witnessed many of the miraculous Jesus performed.
Peter, at one point, confessed in front of others that Jesus was the Messiah. And yet, when Jesus confided to this intimate group that He would suffer, be rejected, die, and then be raised up, Peter was certain that could not happen and told Jesus so. Jesus responded with, “Satan, get behind me!”
Even after that, Peter was with James and John to witness the Transfiguration. They were all overcome with fear and awe. Peter witnessed the multiplication of the loaves and was at the Last Supper where he swore he would never desert Jesus. A few hours later, he denied ever knowing Jesus. 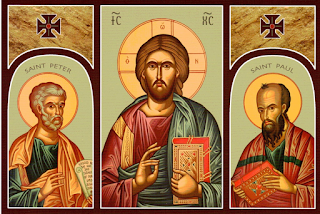 Peter was invited to take a stroll with Jesus on the water, but once again, couldn’t trust the relationship. But when Jesus calls someone, He doesn’t give up. Finally, when Jesus and the fishermen were having breakfast on the beach, Jesus and Peter took a stroll on the sand. After all the ups and the downs, Jesus asked him simply, “Peter, do you love me?” Peter responded, “Yes, you know I love you.” So, Jesus told him, “Feed my sheep.” Three times Jesus asked Peter to feed His sheep. And then he said, “Follow me” and the vocation was sealed!
What in Peter’s vocation story resonated with you?
The calls of both Peter and Paul show us that our vocation is not about being perfect. At the invitation of Jesus, Paul went from persecutor to proclaimer. Peter went from being fickle to being the leader of the Church. It’s about love. It’s about giving everything for the one who loves us and calls us.
Written by Sister Paule Freeburg, D.C.