Today, May 23, we celebrate the Feast of St. Jeanne-Antide Thouret, one of our Vincentian saints. 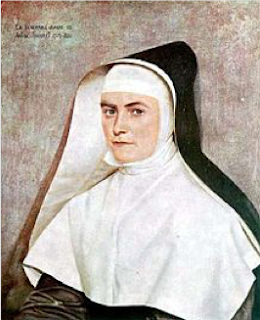 Jeanne was born on November 27, 1765. At age 22, she entered the Daughters of Charity in Paris just a few years before the onset of the French Revolution, an event which would profoundly affect her life. When the Community was dispersed by the government in 1793, Jeanne returned home, but continued what she had learned as a Daughter of Charity–to care for the sick, teach poor children, and help priests who were forced to hide.

She eventually fled to Switzerland and joined a different community, but it did not fulfill her desire to serve those who were poor. Returning to France alone under difficult circumstances and with no official papers, she risked her own life to continue the work God had called her to do.

In Besancon, she was requested to take in young girls and train them in the work in which she had been trained. In 1799, Jeanne opened a school, a dispensary and a soup kitchen for the poor. She founded a new community, now known as the Sisters of Charity of St. Jeanne-Antide. She was canonized by Pope Pius X in 1934. The sisters came to the United States in 1934 to minister to Italian immigrants in Milwaukee, WI. They continue to serve there today as well as in 27 different countries.

It seems that Jeanne did not forget her Vincentian roots. In addition to vows of poverty, chastity and obedience, St. Jeanne’s community also takes a vow of service of the poor.

What can we learn from the life of St. Jeanne-Antide? Perhaps that God’s call persists deep in one’s heart, despite the events that challenge it. She couldn’t ignore what God was calling her to be and do even though it was vastly different from what she originally envisioned. May we be faithful to listening to God’s call deep within, knowing that He will guide us along the path to Him.