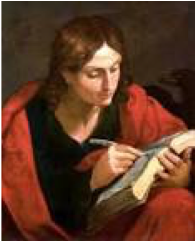 John and his older brother, James were the sons of Zebedee and Salome. Salome was the sister of Mary, the Mother of Jesus. This made John and James Jesus’ cousins. Jesus invited them to follow Him during His first year of public ministry. Jesus referred to the brothers as “sons of thunder.” It is believed that John was the youngest of the Apostles.

John was the only one of the 12 Apostles who did not forsake Jesus during His crucifixion. He stood faithfully beside the cross with Mary. There, Jesus made him the guardian of His Mother. Sometime after Jesus’ death and resurrection, Mary took to Ephesus to live until her Assumption.

John was very involved in the beginnings of Christianity. This fact did not go unnoticed by the Roman authorities. In the latter part of the first century, when Christians were still being persecuted, John was exiled to the prison island of Patmos where it is believed that he wrote the Book of Revelation. John is often credited with writing the Gospel of John, the three Epistles of John, and the Book of Revelation. However, his authorship has often been debated. It is almost certain that he is the author of the Gospel of John and the first Epistole of John. 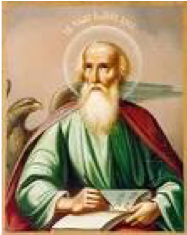 St. John is called the Apostle of Charity, a virtue he had learned from his Savior and which he repeatedly encouraged by word and example. The “Beloved Disciple” died an old man in Ephesus around 98 AD, the only disciple to die peacefully.

It is fitting that John is the patron saint of love, loyalty, friendship, and authors.

John was a consummate model of love and loyalty. He was loyal to Jesus, even risking his life to be with Him at the cross. His writings and letters were about love, so much so that a disciple once asked him why he didn’t write about other topics. John replied, “There is nothing greater than love.”

The power of love is no myth! We have heard and seen many examples in our lifetime: someone who is miraculously saved from a tragedy because someone else reached out for help; the kindness of a stranger that gives hope to another; and so on. Each of us can do our part in this world! After all, we are all disciples of Jesus, too!