Home » Blog » Uncategorized » Feast of the Translation of the Relics of St. Vincent de Paul 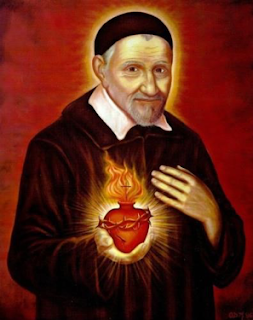 April 25 is designated in the Vincentian calendar as the Feast of the Translation of the Relics of St. Vincent de Paul.

Recently, the world witnessed the burning of the beautiful cathedral in Paris–the Notre Dame. It was a devastating sight to behold as 850 years of craftsmanship was, in part, destroyed. For many, it represents part of the collective past of countless people who worshipped there or who came to stand in awe, inspired by its beauty. It has survived wars, revolutions, riots, and plagues and received countless cries of human suffering offered up. Recent figures record over 13 million visits per year.
So, what does this have to do with our Vincentian feast with such a strange name?
In Christianity, the translation (transfer) of relics is the removal of holy objects from one locality, such as a tomb, to another, typically a reliquary in a church or cathedral. This translation has taken different forms, including all-night vigils and the carrying of the precious remains in a bier of gold or silver, overshadowed with canopies. (Read more about that here.)
After the French Revolution, the Vincentian priests installed their congregation in Rue de Sèvres in Paris, where a new chapel was completed in 1817. In order to honor the founder of their community, the priests asked permission from the Archbishop of Paris to transfer the remains of their “Great Apostle of Charity” from the Rue du Bac (the Daughters of Charity Motherhouse) to this tiny, modest church known as St. Lazare.
To celebrate the relocation of the remains of St. Vincent, Archbishop de Quélen organized a procession of St. Vincent’s remains in 1830. The procession was intended to stand out as a major public manifestation of religion amid an increasingly anti-clerical atmosphere. The relics left the Rue du Bac on March 30 and arrived at the archbishop’s residence at Notre Dame de Paris. 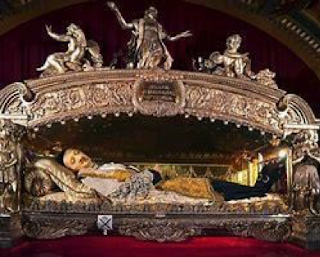 The ceremony of the transfer of the relics began with vespers in the afternoon, leaving the Cathedral of Notre Dame by a long procession involving thousands of dignitaries and the faithful. The procession halted at locations connected with Vincent’s memory: the Hotel Dieu, the Institut de France (near where he lived on Rue de Seine), the charity hospital, and the site of the hospice on the Rue de Sèvres where he had preached and sent St. Louise de Marillac and Daughters of Charity to minster to the poor.
On April 21, 1830, Catherine Labouré entered the seminary of the Daughters of Charity. Four days later, she took part in the solemn translation of St. Vincent’s relics from the Notre Dame Cathedral to the chapel where they rest at the present time. Eight hundred Daughters of Charity participated in this event. The translation of the relics was followed by a novena before the relics, a novena in which Catherine participated. It was during this novena that she saw the heart of St. Vincent de Paul in a reliquary that had been placed on the altar of the chapel of the Rue du Bac.
And so, especially today, we have reason to deeply connect with the people of Paris and the plight of Notre Dame.
Written by Sister Eileen Browne, D.C., Province of Ireland. 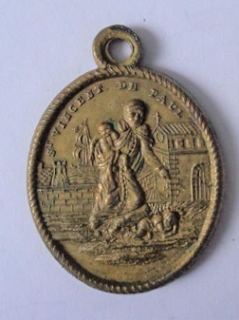 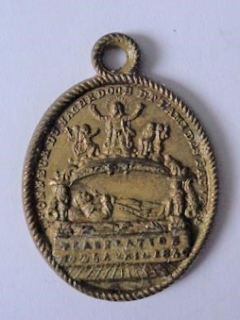 Pictured Above: 2 sides of the medal commemorating the translation of the relics (1830).