“In those days, MARY SET OUT AND WENT WITH HASTE to a Judean town in the hill country where she entered the house of Zechariah and greeted Elizabeth. When Elizabeth heard Mary’s greeting, the child leapt in her womb. And Elizabeth was filled with the Holy Spirit and exclaimed with a loud cry, ‘Blessed are you among women and blessed is the fruit of your womb. And why has this happened to me, that the mother of my Lord comes to me? For as soon as I heard the sound of your greeting, the child in my womb leapt for joy. And blessed is she who believed that there would be a fulfillment of what was spoken to her by the Lord'” (Luke 1:39-56).

And Mary responded with the beautiful prayer/song that we now call the Magnificat! The Church celebrates this Feast of the Visitation on May 31.

In its beginnings, the Daughters of Charity were concentrated in the sections or neighborhoods in Paris around the home of St. Louise de Marillac. As requests came for our sisters, Louise sent them to places in the city and outskirts of Paris. They traveled distances that are not far by our experience today with modern transportation, but were significant distances by foot or stagecoach in the 1600s. It became difficult for Louise to gather her sisters at her home, or what eventually became the Motherhouse, for formation, guidance, and education.

Louise, having a strong devotion to Our Blessed Mother, recognized the gift Mary brought to Elizabeth by her visit. Mary brought herself and she brought her Lord! It was an encounter of sharing and service. Louise modeled Mary’s visit to Elizabeth as she began to visit her sisters on a regular basis. She was a link between the sisters of a local community and the other houses of the sisters. Louise conversed with them about their relationship with God (spiritual life), with those who were poor (their ministry), and with one another (their life in community). She listened, observed, and guided where needed. 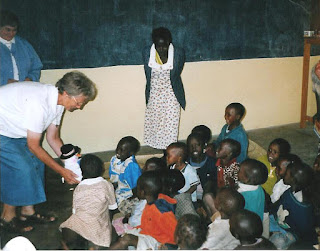 As the Community grew outside of France (as sisters were sent to Poland), new provinces were formed to oversee the particular country or geographical area. A Daughter of Charity was named in each of these provinces to do what Louise was doing in France. As visiting the sisters and the houses was a major part of this sister’s ministry, she was called a visitatrix, the French word for one who visits.

As provinces increased around the world, there came to be a feast day to focus on, pray for, and send blessings to these visitatrixes. The model goes back to Mary’s visit to Elizabeth. The community celebrated this feast still today. This year, our two visitatrixes from the United States, Sister Katie Norris (Province of St. Louise) and Sister Julie Kubasak (Province of Los Altos Hills) are celebrating with visitatrixes from all around the world during the International Visitatrixes Meeting in Paris.