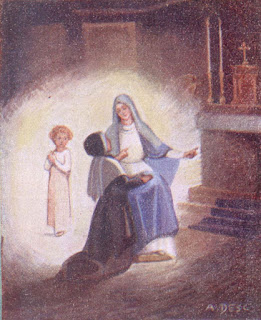 I read a short book about the miraculous visions she had of St. Vincent and the Virgin Mary. On July 19, 1830, late in the evening, St. Catherine was called by an angel in the guise of a young child to meet the Blessed Mother in the chapel of our Motherhouse in Paris. St. Catherine was simply a Seminary Sister (novice), but Mary said to her, “God wishes to charge you with a mission.” Those are the words that really stood out to me.

When I finished the book, I knew more about her but I didn’t really feel as though I could relate to her. I thought it was wonderful that she had been gifted with these visions and shared the Miraculous Medal with the world. I put the book away and went on my journey.

When I got to Seminary (novitiate), I read another book about the life of St. Catherine. This one was more in depth and described her life as a Daughter of Charity. That was when I had my “AHA!” moment. After meeting with the Blessed Virgin, she went on to serve the elderly and infirmed persons for the next forty years. She lived a life of humble service to the sick and dying. That was the moment that I realized why she is a saint. Personally, I see her saintliness in the everyday events of her life and the way in which she served.

Recently, I was at our Motherhouse. St. Catherine’s body lays incorrupt in a glass case to the right of the main altar. When I got to the altar to pray, my first thought was “I expected you to be taller.” Not a very holy thought. But, I just knelt there and kind of waited. Later, during my time at our Motherhouse, they showed us the hallway that St. Catherine walked down to get from her dormitory to the chapel. That was where I felt closest to her. I thought of her daily routine of walking up and down the hallway–all the things she must have done as a Seminary Sister at the Motherhouse.

“God wishes to charge you with a mission.” Thank you, St. Catherine for living our that mission each day in your call, not only as a visionary of the Blessed Mother, but also in your daily service as a caretaker for those who could no longer care for themselves.