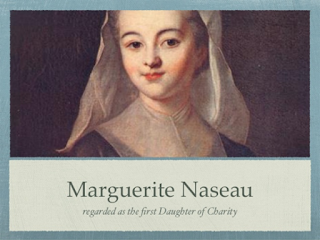 The eldest of nine children, Marguerite Naseau (1594 – 1633) was baptized on July 6, 1594, a significant date on the Vincentian liturgical calendar. Marguerite, “faithful to her Baptism,” served persons who lived in poverty and “her charity was so great that she died from sharing her bed with a plague-stricken girl.”

Though Marguerite died before the foundation of the Daughters of Charity (in 1633), she cared for sick and poor persons in the Confraternities of Charity (1630) with St. Vincent and St. Louise. St. Vincent thought she was “an ideal Daughter of Charity.” Both observed in Marguerite the hallmarks of one who might discern God’s call to be a servant of the poor. Marguerite “was the first sister who came to serve…in the parish of Saint-Sauveur” and “the first…who had the happiness of showing others the way, both to teach young girls and nurse the sick poor.”

Open to the promptings of the Holy Spirit, Marguerite reached out in an active love, her spirit of availability leading her to “give up a practice of charity to take up another.” 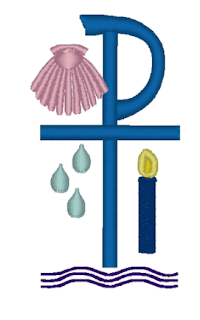 Presently, Daughters of Charity around the world prepare for the General Assembly in 2021 with the theme “EPHPHATHA,” the prayer said to open the candidate’s ear to the Word of God at Baptism. Each sister can be inspired by Marguerite, “the one who influenced” St. Vincent and St. Louise.

Recently, Pope Francis described the Blessed Virgin Mary as an “influencer.” Her “yes and her desire to serve were stronger than any doubts or difficulties.” Likewise, it was with Marguerite Naseau.

St. Vincent’s Conference on Marguerite Naseau (1643) provides a blueprint for Daughters of Charity characterized by such virtues as simplicity, charity, humility, zeal, and dependence on Divine Providence.

Marguerite depended on Divine Providence greatly. In her desire to teach, “she had…no other..school mistress but God” because “she was…a poor, uneducated cowherd.” Marguerite equipped herself with the resource to accomplish her task. She bought a “primer.” In humility, she sought help in learning to read; “she went and asked the Pastor to tell her the first four letters of the alphabet.” Later, “she asked about the next four and so on for the rest.” Boldly, she looked for a passerby who might help her. She wasted no time, studying while taking care of the cows. She “gradually learned to read, then taught other girls in her village” and when instructed, brought them “from village to village to teach the young people.” Having no resources “except Divine Providence,” she experienced poverty while remaining “humble and submissive.”

Marguerite had no self-interest. Her motive was God’s glory. Even though she helped everyone, she was ridiculed by the village people. Nevertheless, “her zeal grew.”

Marguerite was “so attached that she gave away all she had. She provided for the education of a few men…supplied them with food and encouraged them to serve God.” Her good witness “attracted other girls” and she encouraged them to “detach themselves from all superficial things and to embrace a devout life.”

While engaged in work, Marguerite was attacked by illness and, ready to die, she went to the hospital, “her heart filled with joy and conformity to God’s will.” Her fidelity to Baptism and her loving service makes her an inspirational figure for all Daughters of Charity as they “give themselves to God in community to serve Christ…in a spirit of humility, simplicity, and charity.”