Have you ever considered what you would do or how you would respond if your town/city was taken over and you were threatened with losing your ministry–or even your life–if you did not renounce your faith?

How would you navigate the terrain of two men in authority who keep edging closer, determined to bring you to the guillotine?

THEN: 1794 – Reign of Terror in the French Revolution
Daughters of Charity, the Martyrs of Arras, tell the story in their own words: 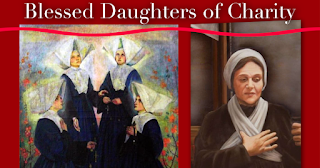 For 137 years, we have been ministering in the rural town of Arras in a free school for girls, a dispensary, and regular home visits to those who are poor and destitute. We continue on each day peacefully, promised immunity from harm because of the charity work we do…until…our home is searched and we receive threats of a takeover for our work.

Our Paris Motherhouse directs us to send the two youngest sisters to Belgium for safety. One of our companions chooses to leave and return to her family.

The other four of us, Madeline (the Sister Servant), Frances, Teresa, and Joan chose to stay in Arras. Why did we stay? A get away in Belgium was nearby.

True to our mission, we remained in solidarity with the people. We chose to console, share, and spread the compassionate love of God in the midst of these days of fear that became the bloodiest days of the revolution.

The danger came closer when Joseph Lebon, an apostate priest, formerly of Arras, was put in charge in 1793 whereby he stepped up the brutality going far and beyond what the law dictated. He was after us, changed our ministry from House of Charity to House of Humanity. He expelled us and replaced us with people hungry for power and money.

We were in high anxiety and concern for all the people. We visited the families, distributing donations and helping people escape to Belgium.

Nine days later we were placed under arrest for the first time, deprived of our pensions and dubbed “suspects.” Revolutionary papers were “discovered” in our outhouse. We were called to the Tribunal.

Seven weeks later, we were placed in prison, the first of three. The second prison was called “Providence” for depraved women — 500 crowded together, rigorous untold barbarity. In the prisons, we gathered groups of women who shared fear and compassion and mutual help to stay alive.

The third prison, de Baundets, was the slippery stone to the scaffold where the inmates were tortured and deprived of the necessities of life We continued our compassionate charity in the circles of women. 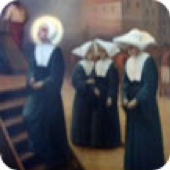 Sister Madeleine told the women: “Calm yourself, we shall be the last.”

The authorities were planning many executions among the people of Arras and were scared to kill us because of the reaction of the people. Therefore, they set up the scaffold in Cambrai, some distance from the townspeople of Arras.

In the dark of night, they carried us out in horse carts going full speed heading, changing horses and a broken wheel midway.

We walked to the scaffold calmly singing “Hail, Star of the Sea” and carrying our chaplets or rosaries. Madeleine was the last of us to walk to the scaffold. She told us what she would say to the crowd: “Listen, Christians! We are the last victims, the persecution is going to stop. Jesus will rise again in glory!”

Her prophesy came true. Joseph Lebon was forced but he people to stop the persecution and was beheaded six weeks after the four sisters were guillotined. 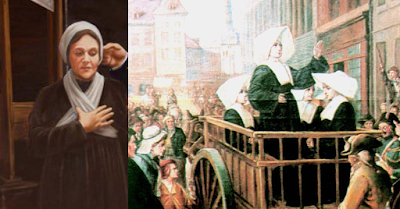 The security situation continues to deteriorate and the various gangs are armed and scaring the population. A sister living near the frontier told us this morning that two gangs have joined together under the leadership of Arnel, the most notorious gang leader in Haiti. Mythology is developing around him that he can’t be caught or killed. Yesterday, they stopped a Coca-Cola truck and an egg truck, emptied them, and distributed the contents to his followers.

The gang in Crois de Bouquets has almost 400 well-armed members. Boys as young as 14 and 15 have been seen with guns bigger than they are. They have started to enter homes at will and take whatever they want. The fear among the people is real. A gang leader said the police help them and the government gives them money.

In our little corner of the world, things are relatively calm and we are going about our daily activities with prudence. I am sure that the prayers and concern of the sisters and our many friends are what is keeping us safe.

Through the witness of the martyrs of Arras, may we be faithful to our commitment to stand with people who are poor.