When I was asked to write about Blessed Louis Francois, I said, “Sure, why not? … Um, who is he?” Turns out, he was quite a guy! 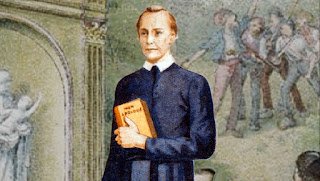 Blessed Louis Francois is not the most well-known martyr out there, but I think that being clubbed to death by a mob of angry women should earn you some serious martyr cred. You’ve probably heard of St. Thomas Moore; he’s famous for maintaining his integrity (and losing his head) by refusing to acknowledge a civil leader of the church. More than 200 years later in France, Blessed Louis met a similar fate.

When the French parliament was making moves to undermine the authority of the church by confiscating property and enforcing a “loyalty oath” on priests, Blessed Louis wrote pamphlets of oppositions, the most well-known of which was called “mon apologie.” He had a lot of influence on other clergy who followed his lead in refusing to sign the oath and even empowered some to retract their prior acquiescence.

As you can imagine, this did not go over well with the government. Francois was imprisoned (well, the government put a guard outside the place he was living and turned it into a prison by bringing other “offenders” there, too). Joseph Boullangier was the bursar who managed to escape and lived to tell the tale. He described Francois as “one of the most zealous and best defenders of the Catholic, Apostolic, and Roman religion against the oath demanded from priests by the French National Assembly, and also against the writings of those in favor of the oath.”

But, as history often shows us, being a zealous defender of the church can be hazardous to your health…and to your life. On September 3, 1792, Francois and 71 others were killed. Blessed Louis tried to reason with the civil officials, but his writings had caused them such trouble that he was thrown out the window where he was met by an angry mob of women who ultimately killed him.

I always feel bad when the church recognizes a martyr “and companions.” I mean, didn’t the companions die for the same cause? Aren’t they just as much martyrs? Blessed Louis died alongside 70+ individuals that day and I don’t know their names. So, Blessed Louis and companions, thank you for your witness and integrity. I don’t deny that I’m hoping to avoid the privilege of martyrdom, but I pray that, in the face of persecution, I may have your courage to speak the truth, no matter the cost.