Home » Blog » Uncategorized » Rosalie Rendu: On Fire with Love for the Poor 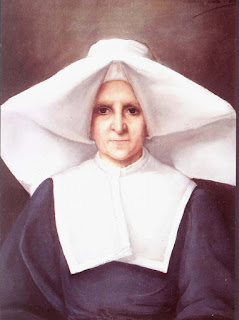 She was born Jeanne-Marie Rendu on September 9, 1786 in Confort, France, not far from Geneva. The eldest of four girls, Jeanne-Marie came from a family of small property owners which brought along a certain affluence and respect throughout the area. She was baptized the day she was born in the parish church of Lancrans.

Jeanne-Marie was three years old when the French Revolution broke out. Starting in 1790, it was compulsory for the clergy to take an oath of support for the Civil Constitution of the Clergy. Numerous priests, faithful to the Church, refused to take this oath. They were driven from their parishes, some being put to death while others hid to escape their pursuers. The Rendu family home became a refuge for these priests. The Bishop of Annecy found asylum there under the assumed name, Pierre. Jeanne-Marie was fascinated by this hired hand who was treated better than the others. One night, she discovered him celebrating Mass.
It was in this atmosphere of solid faith, always exposed to the dangers of denunciation, that Jeanne-Marie was educated. This exceptional environment forged her character. One night, in the basement of her home, lit by candlelight, Jeanne-Marie made her First Communion.
Later, the deaths of her father and youngest sister just two months apart shook the entire family. Jeanne-Marie, aware of her responsibilities as the eldest, helped her mother, especially in caring for her sisters. Six years later, on May 25, 1802, 16-year-old Jeanne-Marie arrived at the Daughters of Charity Motherhouse in Paris. This was just 17 months after the reopening of the seminary, free from suppression by the Revolutionaries. Upon entering the community, she was given the name Rosalie.
Prodigious worker and organizer model of the 21st century for empowering the Vincentian legacy, Rosalie experienced incarnational mysticism. Rosalie lived her spirituality every day, much of which she received from the poor she served. She meditated on the words of St. Vincent de Paul and on the holy card she received and used for prayer and examination of conscience.
Like Vincent, Rosalie knew how to be a friend to the rich and the poor. The poor loved her deeply because they sensed that she lived out precisely what she asked of the sisters who accompanied her. She asked of them, in the words of one of the witnesses: “welcome everyone, speak to the poor with both kindness and dignity, do not make them wait. ‘Treat them,’ she said, ‘as you would treat your father, brothers, and sisters.'”
Why is Rosalie significant for us today? She developed a network of charity. This tender woman was fearless although she lived in turbulent times. Rosalie lived her spirituality every day, much of which she received from the poor she served.
Elizabeth Johnson writes: “…paradigmatic figures who emerge in the course of history are like a Milky Way thrown down from heaven to earth … a shining river of stars spiraling out from the center of the galaxy … to light a path through the darkness. They are women and men who shine like the sun with the shimmer of divinity, showing the community the face of Christ in their own time and place. They distill the central values of the living tradition in a concrete and accessible form. The direct force of their example acts as a catalyst in the community, galvanizing recognition that yes, this is what we are called to be.”

That is precisely what Rosalie Rendu says to us today.