Today, September 11, is the Feast of St. Jean-Gabriel Perboyre, C.M. He was a missioner to China and a holy martyr. FamVin describes the life of this courageous man who, “walked through the bitter valley and made it a place of springs,” (Psalm 84:6). 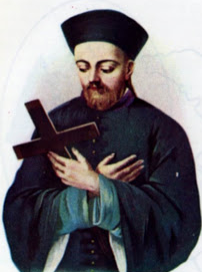 This image of St. Jean-Gabriel Perboyre holding a crucifix paints a thousand words. He gazes lovingly on the crucifix, his right hand gently rests on his heart, filled with a compassionate love.
Do you wear a cross or crucifix around your neck? Maybe you carry a cross or crucifix with you. Or you have one displayed in your home or office. Today might be a good day to imagine a crucifix or cross. Maybe you carry a cross of anxiety, suffering, sickness, bereavement, or trouble of any kind.
The gospels record accounts of Jesus carrying His cross to His crucifixion, events also recalled in the Sorrowful Mysteries of the Rosary. On Good Friday, Jesus’ Mother, Mary, and John, the beloved disciple, stood at the foot of the cross, dejected, sad, lonely, and lost in grief. However, on Easter Sunday, Jesus was raised to new life. Christians believe that the Spirit of Jesus accompanies them daily as they carry their cross.
Father Perboyre was familiar with the cross of discipleship and committed himself to follow Jesus–to the point of death, carrying his cross. He recognized the “door into the dark” described by poet, Seamus Heaney (The Forge) and he embraced Jesus’ mission of “bringing good news to the poor,” (Lk 4:18-19).
Gifted with a supportive family, he loved Jesus and “his piety was noticed.” He loved to visit the Blessed Sacrament and pray. When he was praying, “you could walk over him and he wouldn’t notice.” Parental influence and childhood prayer showed him as one who “loved the poor and often saved his bread for wandering beggars.” Jean-Gabriel’s whole life witnessed to sacrificial love, imitating Jesus who “gave up his divine privileges…took the humble position of a slave…in obedience to God and died a criminal’s death on the cross,” (Phil 2:7-8).
Father Perboyre’s heart’s desire to become a Vincentian missionary in China came true in March of 1835. He went to Macao, gateway to China, and studied Chinese. In December of that year, he sailed, disguised with captain and crew, to interior China. Christian missionaries were not allowed at that time. He was appointed to the Honan mission and traveled with his companions for 17 months to Nan-Yang. There, he was appointed to St. Fancis Regis Clet’s house from where Father Regis, a Vincentian missionary, was taken prisoner and executed on February 18, 1820.
Father Perboyre lived with two Vincentians who taught him Chinese, introduced him to the Catholic villages, and warned him of the dangers that he might encounter on the mission. From 1937-1938, after an illness, he reanimated the faith in the villages through preaching, catechizing, and administering the sacraments.
Life in China was not easy. Jean-Gabriel taught the people about suffering and persecution, aware of the immanence of trouble at any stage. He saw the mission plundered and burned down. He fled for his life into the bamboo forest and made sure that everyone escaped before he left. He was betrayed, captured, and spent one year in prison where he was brutally tortured. Still, when asked to stand on the crucifix, he refused.
One wonders, was Father Perboyre inspired by St. Thomas Aquinas’s teaching on the cross as an example of love? Father Perboyre’s life reflects the virtues that St. Thomas describes–“patience, humility, obedience, and despising earthly things.”
Father Perboyre’s familiar prayer to Jesus challenges each one to transformation. With Seamus Heaney, I personally say, “Forgive the way I have lived indifferent; forgive my timid circumspect involvement,” (Station Island V11).
Written by Sister Anne Neylon, Province of Ireland