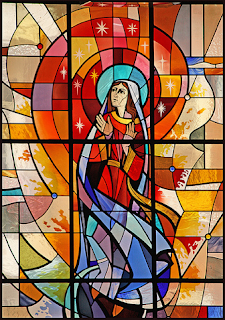 Mary’s Assumption! What does it mean? Why did it happen?

Let’s go back to Mary as a young teen in Nazareth. It is believed that she led a very ordinary life with lots of hard work helping her mother with household chores. The family was an integral part of the local village, so Mary could be counted on to participate in the events.

Imagine, one day being totally taken aback by this stranger greeting her and telling her that she has found favor with God. So much so that she was asked to participate in God’s plan to bear His son to the world. She questions and then accepts. “I am the servant of the Lord, I will do as God wills.”

If that wasn’t enough, she hears about her cousin, Elizabeth, who is pregnant although late in life. She drops all and goes on foot to care for her during the last three months before her baby is born.

Her own delivery would not be easy. She and Joseph go on a long journey to Bethlehem, his family’s origins, to register for the census. Scarcely arrived when the baby is due, but where to go? In an animal shed, she gives birth to the Son of God. Both she and Joseph are awed by the visits of shepherds and kings to see this baby boy.

Shortly after the circumcision, Joseph is warned in a dream to take Mary and the child and flee to Egypt. Once again, a long journey, this time with a newborn to unknown places and situations. 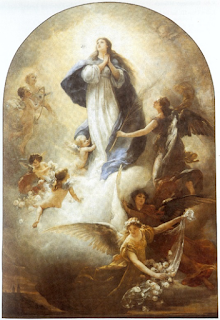 So it was throughout Jesus’ life: teaching Him His duties as a young Jew, accompanying and supporting Him as He began His ministry. How could Jesus not know and love this beautiful, loving mother? Even in His horrible sufferings and death, Mary was present. She remained with the disciples in prayer as they received the Holy Spirit. John had taken her into his home as his own mother. Her life of giving, loving, and supporting continued until her death. What better gift could Jesus give her to show His love for her than to bring her to His side in heaven?

Remember her mantra from the very beginning with the angel, “Be it done to me according to your will.” It followed Mary on earth and is with her in heaven as she does whatever God asks of her. May we follow in Mary’s footsteps.

Happy Feast of the Assumption of Mary!